This is coming to you from Lynn Mass USA, home of "The Electric Harbor".

Let's start off by considering Sea Level Rise, its effect on Lynn Harbor, and our response to impending change.

We’re not going to waste time speculating about how big The Ocean is going to get, how fast it will rise, or who’s at fault.

That’s for the Politicians and Pundits.

After a decade of intense research and regular communication with the top scientists in the field, I know as much about Sea Level Rise as anyone alive.

Here’s what I’m sure of.

The scientific knowledge base updates and expands every day.

So much is being learned that nobody can keep up with everything.

At this point in time, there is zero degree of certainty about what’s coming.

The top scientists have 180 degree differences of opinion.

In this world of uncertainty, one fact is certain.

Earth’s Ocean is warming, and expanding as it warms.

Everything expands as it warms.

It’s an irrefutable Law of Nature.

As a result, tides are getting more powerful.

This expanded surge will push ever further onshore as The Ocean warms and deepens.

Imagine if The Ocean were 2 feet deeper during that storm.

The tidal surge from Sandy would have backed up rivers and streams in New Jersey and flooded communities twenty miles inland.

The warming, expanding Ocean is going to carry major coastal storms further North along the US East Coast than ever before in Human history.

This will occur on a regular basis within decades.

Long Island Sound will become the new Cape Hatteras, absorbing the brunt of every Atlantic hurricane.

That’s if the Ocean continues to warm at its present rate, and Sea Level rises only 2 feet.

I said no speculation about Sea Level Rise.

But, my knowledge tells me the above scenario is very likely within 50 years.

Baltimore, Washington DC, Philadelphia, and Manhattan will be inundated on a regular basis.

However, that remains a maybe, and it’s a half century in the future.

This is about NOW.

How can we prepare?

What are we going to do in response?

We cannot stop this.

Are we going to turn Planet Earth into The Netherlands?

Let’s put the relentless power of the rising tide to work for us.

I see the newly expanding Ocean as a vast, untapped natural resource.

Tidal Energy is on the upswing at a time when every other resource is dwindling. 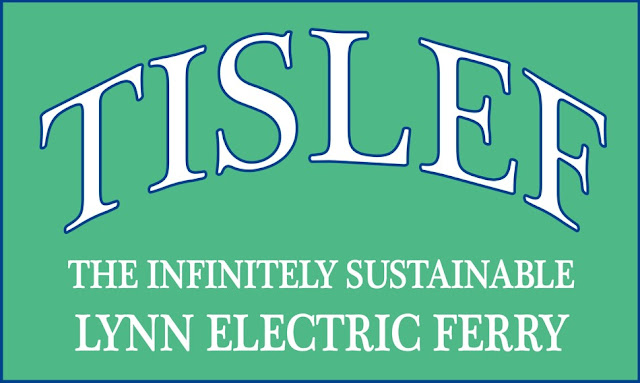 Tidal generators are in use all around the world.

Most are still subsidized, hoping for positive results.

Even more remain on the drawing boards.

This industry is developing slowly because there is still no efficient way to deliver the power generated by an undersea turbine to the grid.

In Lynn, we have a National Grid distribution center right on The Harbor.

The tide fills and empties Lynn Harbor twice each day with plenty of power to drive an undersea generator.

Thanks to Yours Truly, the next big thing in Tidal Generation is going to be battery powered electric ferries recharged via Tidal Turbine.

I’ve worked to promote this tidal powered electric ferry concept for several years because of Lynn’s specific needs and the rare situation of having everything in place to generate and fully utilize Tidal Electric.

In recent months Siemens has launched an electric ferry in Sweden called the Norled Ampere.

It’s much bigger than needed for the Lynn ferry, and draws its power from the regions electrical grid, not an undersea turbine.

But the propulsion system is there.

By downsizing and adapting Siemens electric motor for the smaller ferry, and re-powering directly at the dock, using electricity provided by the undersea turbine, TISLEF becomes reality.

After the cost of development and installation, this system is infinitely sustainable with only the ongoing expense of operation, upgrades, and regular maintenance.

The ferry has no enormous fuel costs or toxic emissions, from the power source right through to the vessel itself.

Lynn is currently working with the State of Massachusetts to develop a commuter ferry from Lynn to Boston.

The service is approaching the end of its two year trial run.

I have been in contact with the top people in the Tidal Energy field about this idea, including Siemens RE Norled Ampere.

Their people directed me to others and as you are reading, the Lynn Harbor concept is spreading throughout the Tidal Energy industry.

They are excited about the opportunity available here in Lynn.

They recognize a solution that fits the problem and are ready to participate.

This ferry project is a key to Lynn’s revitalized economy.

It’s a great idea, but the project needs a boost if it is to continue operating.

There are undersea turbines in use today capable of powering a battery operated commuter ferry from Lynn Harbor to Boston.

I have everything in place to bring this to Lynn.

The instant a project of this nature is announced, there will be spontaneous Global interest in The City of Lynn.

Developed and built in Lynn, The Infinitely Sustainable Lynn Electric Ferry…known as TISLEF…will become the worldwide standard for electric ferries.

Lynn Harbor will become the source for Tidal Electric innovation and development.

If we, The People of Lynn, get together and present a unified front, we are golden.

The world will come to Lynn, and bring its money.

The world has always come to Lynn.

This is a truly Global community.

This time, instead of arriving with only the tattered shirt on their back, looking for opportunity, they’ll show up in private jets, dressed to the nines, waving armloads of cash.

That’s when the good stuff starts to happen for this city.

One could say The Infinitely Sustainable Lynn Electric Ferry is a Vehicle For Success.

We can make this happen.

TISLEF is the ticket to success for Lynn and this entire region.

Give it your highest of expectations and it will come!

Then talk it up!