Earth’s Ocean is the most powerful force on The Planet.

Yet, even in the face of steadily dwindling resources, we have not developed an economically feasible way to use this awesome natural power.

There are Tidal Generators installed around the world.

But, these pioneering projects have not shown enough promise to stimulate a Global effort.

The numbers do not crunch.

The cost of designing, installing, and operating Tidal Generators remains extremely high because each situation requires a specific plan.

There are no plug and play Tidal Generators on the market.

The City of Lynn Massachusetts USA has begun an experimental commuter ferry service to Boston as part of a crucial Waterfront Development project.

This two year test, funded by the State of Massachusetts in hope of boosting the local economy, will determine the success or failure of numerous other local projects.

The ferry is a key to the entire plan.

Ridership has been encouraging, but not enough to operate without continuing subsidies.

Unless there is  a sudden spike in public interest, the State funding will expire.

Lynn has a lot of eggs in this one basket.

The ferry is a large part of the overall Waterfront Development plan.

Lynn will be left with a nice new ferry terminal but no ferry.

Unless we come up with a solution.

Let’s go back to the Tidal Energy idea.

I mentioned earlier that we need a plug and play generator to get Tidal Generation rolling.

They have shown that it can be done.

But, the recharging system is an enormous drain on the region’s electrical grid.

Tidal Power is the solution.

The Siemens ferry, Norled Ampere, is a large vessel, requiring batteries with hundreds of kWh to operate and recharge.

That brings the specialized installation factor into play.

Setting up a Tidal Generator capable of charging these batteries makes it cost prohibitive.

TISLEF is much smaller, designed as a 150 passenger ferry. 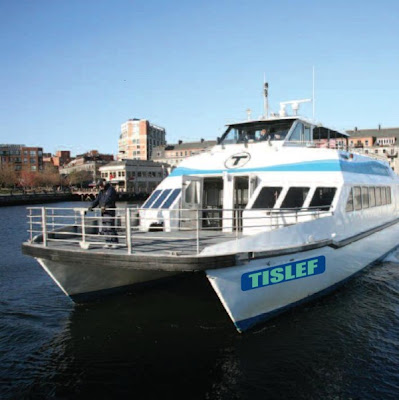 The 5 Mw Shoreline Earth Tidal Unit will can provide the necessary KWh to recharge a vessel of this size for short commuter runs, with plenty of power to spare.

The excess juice can be sold to National Grid for even bigger savings.

Lynn could lead the world in developing this concept.

The ferry can be refitted, electrically powered, recharged via Tidal Power, and in operation within a year or two.

This will make TISLEF economically practical, and open the way for an entire new industry based right here in Lynn.

There are dozens of local ferries that can be adapted, and there are thousands more around the Globe.

All would be more efficient, environmentally friendly, and profits would increase across the board.

Sounds like a dream scenario waiting to happen, don’tcha think…?

All that’s needed is local support to get this rolling.

The idea is so beneficial to so many that a simple statement saying Lynn is working to make this happen will result in a torrent of Global interest.

That’s what we need the most.

The world will come to us.

Announce it and they will come!